Description of This War of Mine

This War of Mine (TWOM) is one of the most impressive and worthwhile titles on Steam over the years. Recently, 11 bit studios have successfully ported this game to mobile devices, bringing their brainchild closer to everyone. With this title, players can experience the true nature of war through the eyes of the survivors. 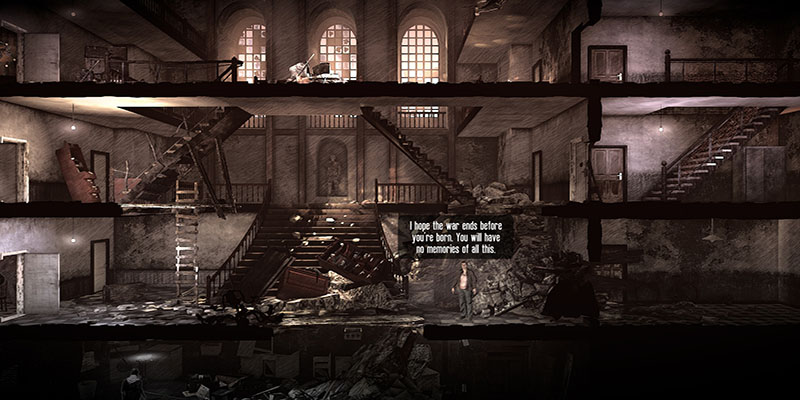 This War of Mine is based on true stories, talking about the fate of Bosnians trapped in the four-year siege of Sarajevo, from 1992 to 1996. According to Wikipedia, the Sarajevo raid resulted in more than 5,000 civilians died, and TWOM is the story of people trying to survive, unable to escape the city.

The best part of This War of Mine is undoubtedly the variety of storylines, both at the beginning and the end. Each character has a unique life, personality, emotions, and reactions to past and upcoming events, making the endings extremely different. With over 12 characters, TWOM can bring hundreds, even thousands of different scenarios, depending on the player’s decision.

From tiny features such as Katia's habit of drinking coffee to Bruno’s addiction to cigarettes, there are also certain influences on their mood, especially in such poor and difficult circumstances. Each person has a specific trait, like Pavle's forte of running fast, Roman's ability to use guns fluently, or Marko's health, etc. Choosing the right job for team members not only increases productivity and efficiency, but also helps them survive when going out looking for necessities at night. You will soon realize that sometimes, running away is the most effective option.

The player's decisions in vital situations are the highlights in This War of Mine. Should I help others when I am also in trouble? Is stealing good or bad in this situation? Would I lie to save someone, or respect the truth and let them die?

Remember, every action has its consequences. That choice may be correct at one moment, but not necessarily later on. The characters in the game will react very strongly to both good and bad situations: they may feel happier, more in love with life, leading to better tolerance to hunger, but they can also become depressed, miserable, leave your side, and even end their own life.

It is the truth and the humanity that has turned This War of Mine into one of the best survival games in the past few years, and it has been proven just last June. Polish Prime Minister Mateusz Morawiecki confirmed to make TWOM as the first official video game that the government encourages all students to experience. Perhaps, up to now, no government has considered a game with enough human value to be a learning material for an entire country.

The World of Black, White, and Red 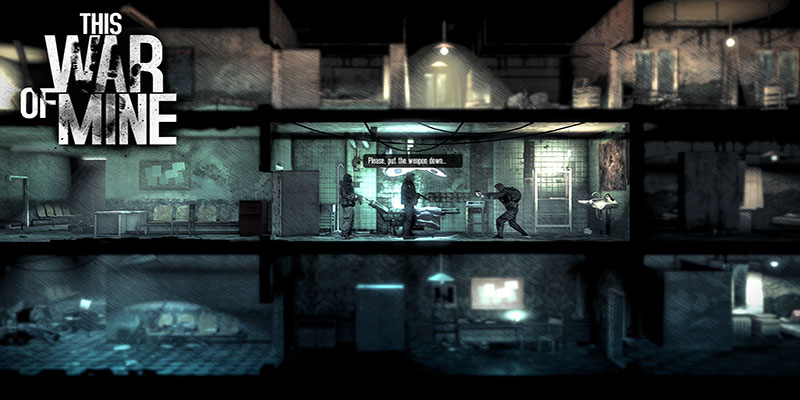 This War of Mine's graphics are not only impressive but also extremely suitable for the context of war. The sharp contrast between black, white, and red, the rough, bold hand-drawn strokes, fully depicts a gloomy, cruel, and chaotic world. The destruction of the city, the hunger, the cold that always threatens every day and hour, all are meticulously and vividly portrayed.

It will be a big mistake to leave out the background music and the very “appropriate” sound of TWOM. The cold and sharp gunshots, the depressing melancholy notes, all soak the game with indescribable loneliness, seemingly unable to escape.

Download This War of Mine MOD APK for Android

This War of Mine is not funny at all, and is definitely not for gamers who prefer a more relaxing and exciting experience. The message is clear: war is a horrible thing, and people caught up in the war are forced into indescribable suffering. If you want to have the most profound and memorable experiences, I recommend downloading the MOD and enjoying TWOM for free. Then, come back here and leave your comments below.