Stick Clash MOD APK is a unique strategy game on the Android platform. This game is from Azura Global. It is currently becoming prevalent, with nearly 10 million downloads on Google Play in a short period.

Mathematics and war appear to be unrelated concepts. On the other hand, the game developers have cleverly combined these two factors to create this unique game - Stick Clash. What did help this game attract such a large number of players? 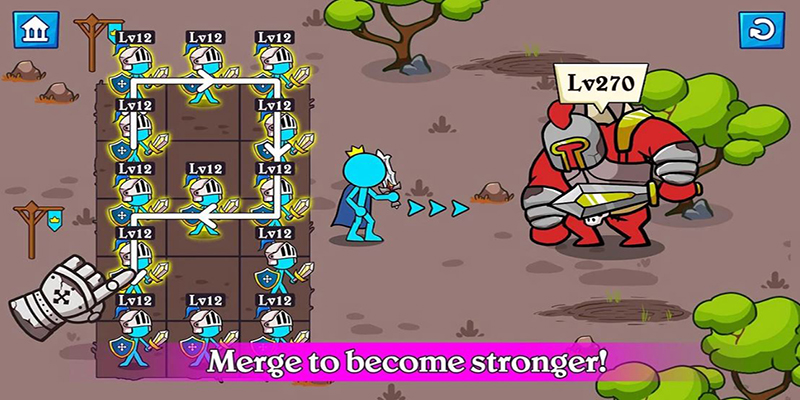 You will use addition, subtraction, multiplication, and division to analyze the numbers to choose the correct route to complete the level. In each path, there are obstacles or enemies. If you go in the wrong order, you will fail.

The rule of the game is very simple. The strong are the victor. How do you know who is stronger? Without relying on equipment, weapons, or special skills, each of the soldiers displayed their strength in a number. The team with the higher total will defeat the opposing team. After that, you will have the power of the opponent you just defeated.

For example, if you have 30 strengths and defeat an opponent with 20 strengths, you will have 50 strengths. This rule affects your decision. You will choose paths with weaker opponents to gradually increase your power to defeat the final boss or save the princess. Remember, you cannot go back in the same direction if you go ahead. Always be careful with every decision you make.

After passing level 7, you will encounter some obstacles. Going through the road with blocks, you don't have to fight anyone. However, you continue to lose strength. You can also pick up some items that will help you double or triple your power.

Notwithstanding, you should calculate picking up these items. It would be best to look at the map again, see which path has a weak opponent and a way back to the item's course; you will get a much higher score than the original number. 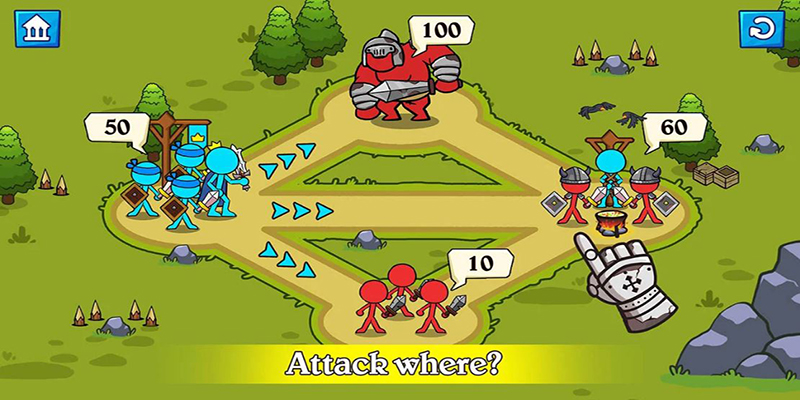 If you get stuck on a level and have no idea how to complete it, you can use hints to see the order of paths you will take, assisting you in defeating the enemy. However, the suggestion is not free. You need to watch advertisements or pay with gems.

Besides, you can use gold coins and gems to unlock some exciting outfits for stick man. Stick Clash offers various exciting clothes, including Roman warriors, tribal chief, Greek warrior, etc.

After each battle, you can collect resources and loot to construct your tower. This feature is still in development. However, we can explore it in the upcoming updates. 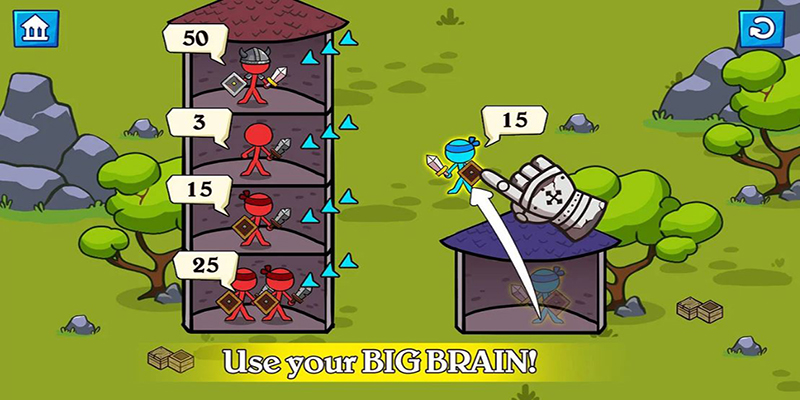 Stick Clash uses classic, simple 2D graphics to simulate battles in a fun way. This graphic style also reduces violence in the game, though there are still some bloody scenes.

The game's sound is also very realistic, with knives and fighting sounds. You will feel as if you are taking part in a medieval battle. When you win, you will also have fun moments with fun background music and trumpet sounds.

The game received a lot of positive feedback. Many people said that it was simple but good enough. It was a game that caused players to make a strategy. They have got exciting moments with this game. Simultaneously, with each 30 seconds match, players can have short moments of relaxation on busy working days. However, many other players said they did not get a good experience because it contained too many ads.

Unlike the usual strategy games, Stick Clash has a different style. If you are a fan of numbers and strategies, download this game now. Use math to help the stick warriors defeat all the enemies!