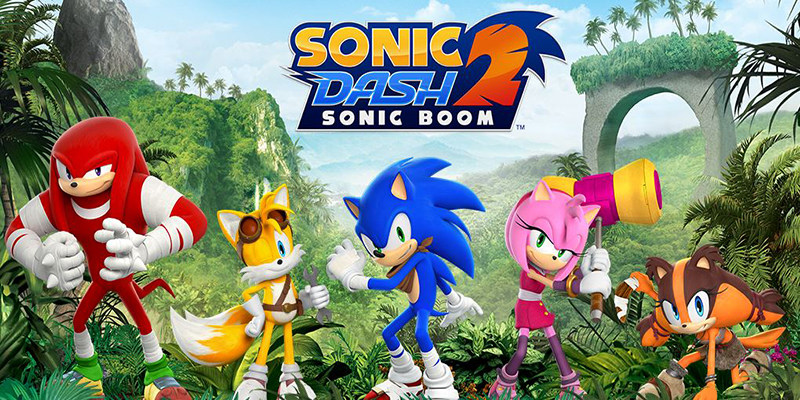 Sonic is an icon of popular culture. It has appeared in movies, comics, and games. In which, Sonic Dash 2 is an exciting entertainment game about this legendary character. If you want to have relaxation moments after long busy days, this game is a perfect choice for you. Sonic Dash 2 requires you to move continuously on three different running lanes. You need to overcome obstacles and collect golden rings to reach the highest score possible. You will make characters dodge, jump, roll over obstacles. Besides, some enemies always want to get in your way. The enemies are as large as the whole army, and they are just as agile as you. Therefore, you have to be flexible with your fingers to win.

Unlike popular endless running games like Subway Surfers or Temple Run, this game is divided into many small stages. After completing the one goal, you will continue to the new locations. Each level has a unique landscape and set of obstacles. It prevents boredom and increases surprise because the player has no idea what will happen next. 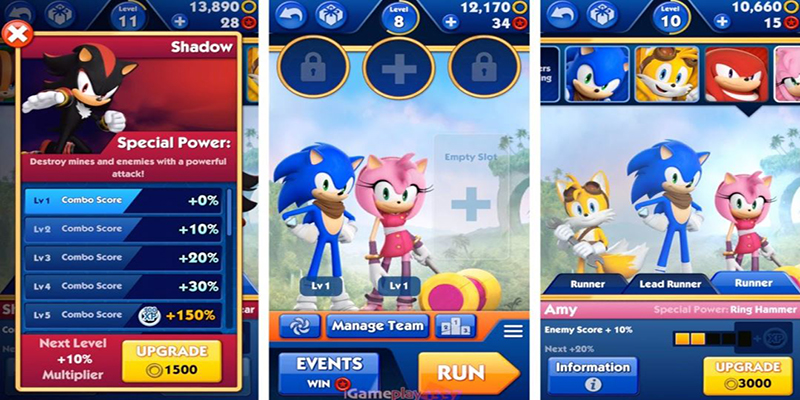 Sonic is the main character of Sonic Dash 2: Sonic Boom, but you also take other players like Tails, Amy, Knuckles, Sticks, and Shadow. When you reach level 11, you will be able to unlock all characters. However, you will need money to open and develop them. Each runner has 15 levels to upgrade with a maximum of 700% power. Each character will have unique abilities. For example, Amy is a strong girl with a hammer capable of turning obstacles and enemies into rings. Meanwhile, Knuckles can create explosions as he jumps or rolls.

As previously stated, there will be many golden rings on the run. The more gold rings you have, the more money you'll make. Aside from unlocking and upgrading characters, you can spend money in the shop to buy items to help your warriors while they are on the run.

When you participate in events of Sonic Dash 2: Sonic Boom, you have the opportunity to win a variety of awards. If you finish them, you will receive rewards such as Emerald, Platinum, etc. However, each event will have its own set of requirements.

On your journey, you will have pets (also known as Spirit). Although they may seem like harmless little creatures, they can help you collect rings or even help you revive in some cases.

Sonic Dash 2: Sonic Boom graphics are built on a 3D game platform, allowing players to have flexible and appealing moving frames. The map system is visually appealing and easy to understand. The game's characters are diverse and beautiful, with razor-sharp details. Game graphics and swipe gestures on the screen allow you to play in a more general and fluid manner than ever before. Besides, the realistic sound system makes it even more appealing.

Many gamers love Sonic Dash 2. With a good game like this, gamers say that they seem to get back to the happy moments of their childhood. Therefore, it is not strange that the game has more than 100 million downloads on Google Play. Many others also said that it has improvements compared to the previous version. However, it has a problem with many advertisements. Gamers are bothered by them. Hopefully, the developers will pay attention to this issue in the future.

Join the endless chase in a colorful 3D world with Sonic's brave friends in Sonic Dash 2: Sonic Boom. Besides, with the unlimited money feature from the game version, you can buy items without worrying about the price.

Can this game run on low-end phones?

Sonic Dash 2: Sonic Boom
Rate this app
Reviews are public and editable. Past edits are visible to the developer and users unless you delete your review altogether.
0★
0 total
5 ★
4 ★
3 ★
2 ★
1 ★
We gather comments to provide users with the latest information.
Sorry, no results found.