Sniper 3D Mod Apk - Have you ever dreamed of becoming a professional sniper? It’s almost impossible to achieve this dream in real life; however, with Sniper 3D, everything seems to be easier than you expected.

Sniper 3D: Fun Free Online FPS is one of many games in the shooting-assassinating genre, like the Hitman Sniper that we have reviewed here. The highlight of these shooting games lies in the addictive gameplay, forcing players to think carefully with each step. Besides, players can immerse themselves in a completely virtual world, similar to The Sims Mobile and The Sims FreePlay. Will this title bring out the best of its kind, or is it just a quick break in a lazy afternoon? 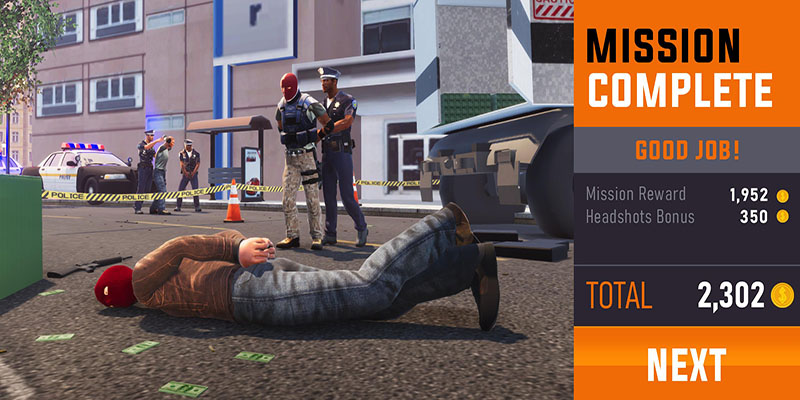 Beginner’s Guide to Be a Sniper

Sniper 3d hack apk follows the first-person perspective. In this game, you have to take down multiple targets - most of which are bad guys, while avoiding harming the civilians.

The game starts with a professional sniper who possesses sublime sniper skills through harsh training. That is why our protagonist has many enemies, which puts their loved ones also at risk. While on a mission, he suddenly knows that his family has been murdered and his lover has been kidnapped. Bearing the pain in his heart, the sniper swears to take his vengeance and rescue his girlfriend.

Sniper 3D provides players with a mission tree and various side quests. You will have the opportunity to become a professional sniper, handling extremely stressful assassination missions that require high concentration and quick thinking. The game requires you to roam around the city, from luxurious buildings to cramped slums, to perform assigned tasks. The job can be destroying suicide bombers without triggering them, eliminating assassins hiding on rooftops, or assisting the police in suppressing dangerous criminals. The further you advance, the harder your missions will be.

After each mission, players can upgrade their weapons with the rewards they received. More advanced weapons and abilities will help a lot during these operations. Gradually, players will discover the truth behind everything and will have to make their own decisions. 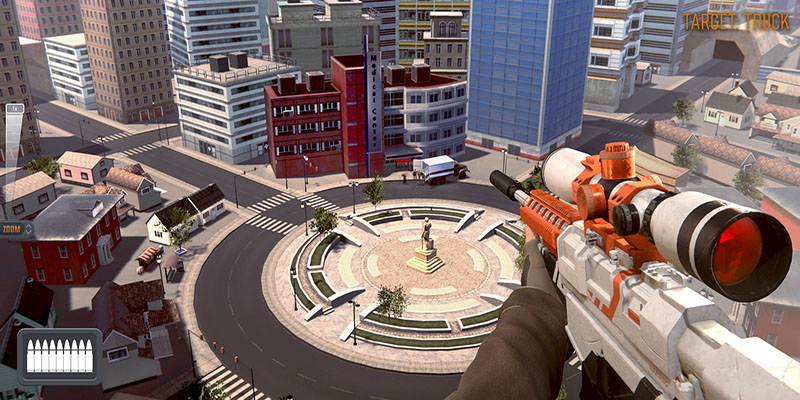 Sniper 3D has an uncomplicated control system. Your main task is to touch the screen to control the character, and use two fingers to zoom the scope. However, in each specific mission, you need to handle the situation differently; thus, controlling will sometimes be challenging. The bullet can fly in the wrong direction with just a small misclick.

The Graphics Is Good, But Not Enough 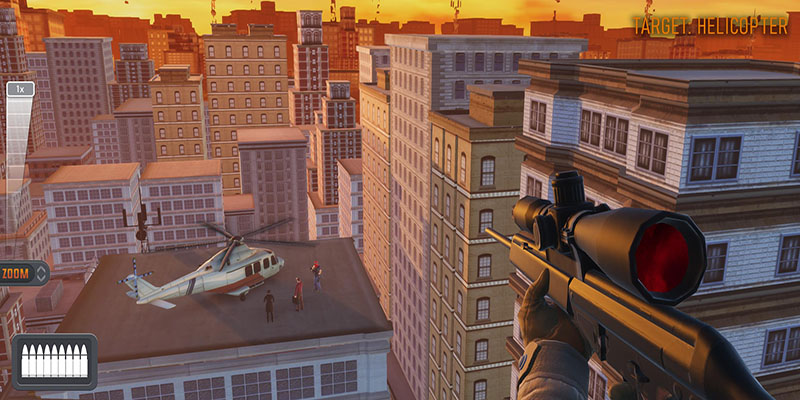 The plot of Sniper 3D is quite well built, but the image quality is not on equal terms. Factors such as buildings, vehicles, environment, and humans are all well represented on a 3D platform, just not too sharp and realistic. The gameplay gets too apparent sometimes, but generally, it can make you sweat a bit.

My biggest impression of Sniper 3D is probably the use of slow-motion effects, much similar to Neo’s bullets dodging scene in “The Matrix”. When you aim and pull the trigger, the bullet exits the barrel and slowly hits your target, creating tension and excitement for the players.

In addition, the sound quality of the game also partially compensates for the shortcomings. The gunfires, street noises, and screams are realistically depicted. Plug in your headphone and enjoy the ultimate shooting experience!

In this sniper 3d mod apk unlimited money and diamonds, you can have unlimited cash to purchase all the weapons and upgrades. The money will increase as you use it. Better guns means a better chance to complete the mission, so pack everything you need before each task. Just remember, don’t buy upgrades and weapons with diamonds, as it does not work.

Sniper 3D
Rate this app
Reviews are public and editable. Past edits are visible to the developer and users unless you delete your review altogether.
0★
0 total
5 ★
4 ★
3 ★
2 ★
1 ★
We gather comments to provide users with the latest information.
Sorry, no results found.