There are not many blockbuster titles on the mobile market, but one of the few is definitely Gameloft's Modern Combat series. Although it was criticized for being the replicated image of Call of Duty - a very famous game, Modern Combat still achieved success in four previously released versions. Modern Combat 5 MOD APK is the most recent one, and it promises to bring many other exciting things right on your mobile screen. Android users can spend about $6.99 to be able to own this charming title.

Modern Combat 5: Blackout is the continuation of Caydan Phoenix’s journey - the best gunner of the special forces under Gilman Security corporation in his fight against the World Liberation Army, an international terrorist organization. Together with brave teammates, players will participate in the war, prevent all dangers before things get out of hand, and eventually unlock all the secrets behind this all-out battle. 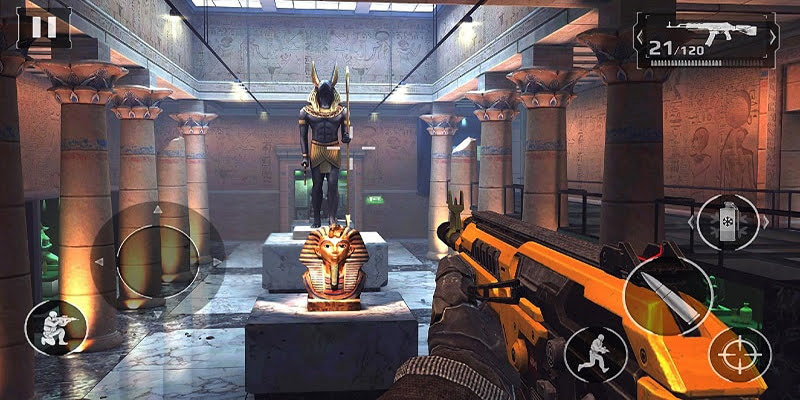 Featuring the classic gameplay of mobile FPS games, Modern Combat 5 uses the virtual keys on the touch screen. This control scheme cannot be as precise as on a PC or a console, thus Gameloft has equipped the single-player mode with an aiming assistant. The aiming system is quite sensitive, making the campaign maps easier to breathe, but hardcore players can reduce the sensitivity if the game is too easy. To create more tension and excitement, Modern Combat 5 also features quick-action minigames throughout the single-player animations.

To increase replayability, MC5 owns many extra levels in the campaign game, with simple to complex achievements for players to conquer. Besides, the game also has weekly events with rewards as experience points and in-game items. The multiplayer part also has a "squad" system, which helps players connect with friends and challenge other teams worldwide. 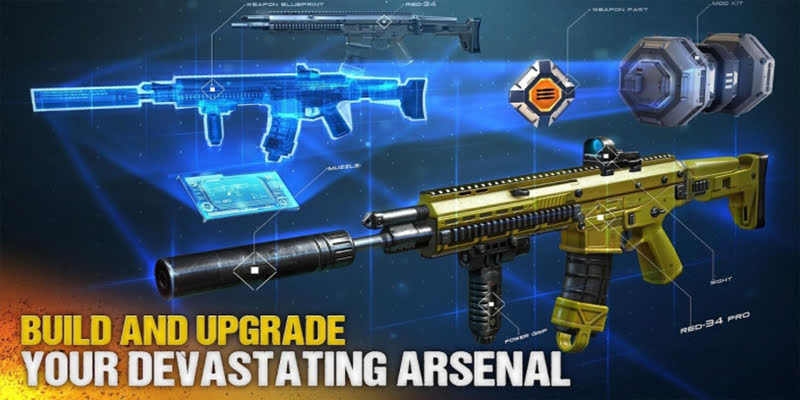 MC5 is the first in the Modern Combat series to feature distinctive character classes, including Recon, Assault, Sniper, and Heavy. Together with four different weapons (submachine, assault rifle, rifle, and shotgun), players can choose various play styles that match their preferences and strengths. These four character classes do not seem to have much of a breakthrough for single-player levels. However, they are very effective in multiplayer mode, where the maps have very different environments and layouts.

In addition to the four character classes, weapons in the game come with various widgets that can completely change the effectiveness of any gun, including silencers, holoscopes, or red dots. These widgets can be unlocked after players have played the single-player mode several times. 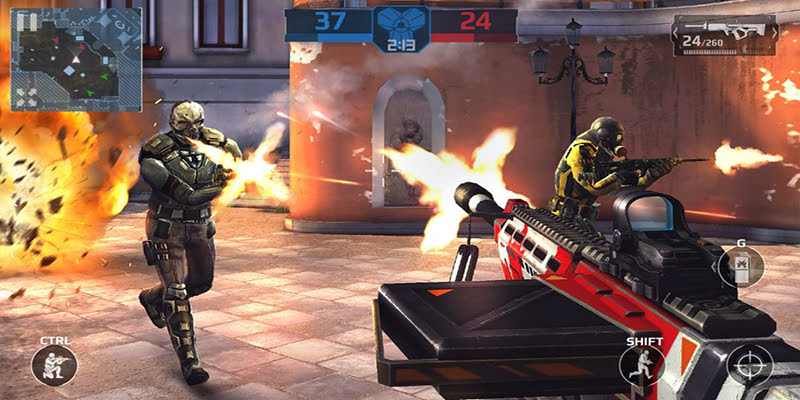 With the new engine capable of draining your mobile processor, it is undeniable that Modern Combat 5 is one of the games that possess the most beautiful and realistic images on a handheld device up to that point. The explosive effects and lighting are all meticulously reproduced. On high-end devices, MC5 can realistically display the effects of water droplets, as well as smoke and explosion scenes. Also, the detail of MC5 is better than previous versions, partly due to the higher resolution textures.

Besides the graphics, the audio in MC5 is also excellent. The campaign dialogues are voiced by eloquent, powerful, and inspiring voices, consistent with the game's plot. Besides, the sounds of gunfires and explosions are also replicated quite well. Therefore, players should equip themselves with a headset to be fully immersed in the atmosphere that MC5 brought.

Even the most hardcore player can fail sometimes. Do not worry. Our MOD gives you the immortal ability (God Mode) so that you can freely explore all the in-game contents and enjoy the engaging story of Modern Combat 5. Good luck, fellow warriors!

Modern Combat 5
Rate this app
Reviews are public and editable. Past edits are visible to the developer and users unless you delete your review altogether.
0★
0 total
5 ★
4 ★
3 ★
2 ★
1 ★
We gather comments to provide users with the latest information.
Sorry, no results found.