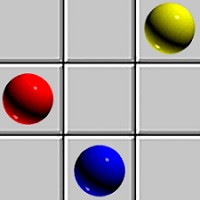 Lines 98 is a classic game built and developed by Andrey Svetlichny. The game is highly intellectual when it requires players to arrange at least 5 balls of the same color horizontally, vertically and diagonally to score points. Currently, the game is the spiritual entertainment food of millions of gamers around the globe in their spare time.

Along with Snakes of prey, Lines 98 is a game that is attracting the attention of gamers of all ages. The game is highly relaxing and uses the brain, helping gamers quickly dispel the worries, sorrows and fatigue of daily life. The attraction of gameplay is intense when the number of terrible downloads from Android, iOS, and Windows platforms is constantly increasing every day.

Opening the game Lines 98 is on the phone screen will appear a large square with 81 small squares containing balls of different colors are scattered. The task of the gamer is to move the balls of the same color to form horizontal, vertical and diagonal rows to score points. Every time you move a ball, 3 more balls will appear for the player to use for the next time. If arranged scientifically and intelligently, the gamer will quickly erase all the same balls on the screen, which means that the bonus points are extremely high. Meanwhile, if you play badly, the entire number of balls will fill 81 squares, meaning you have to accept the loss. The game allows you to return the turn (ie return the ball to the original position) if you accidentally send them to the wrong position. Many players have ambitions to score the highest in this game.

Lines 98 has a simple way to play when you just need to touch any ball that you want to arrange them and then click on the empty square you want the ball to move to. You can set the speed of the ball to move, including: normal, fast, slow. It is not too difficult for players to score in this game, but high or low score depends on the intelligence of each person.

Lines 98 is built on a 2D graphics platform with an interface of a 9x9 square. On the screen, in turn, balls with the colors: blue, red, purple, yellow, orange, pink, brown appear for the gamer to arrange them. The sound in the game is the sound of the ball moving and exploding when scoring. The simplicity in how to build content and form is the plus point of this gameplay.

We offer Lines 98 classic and original on Google Play. Choose the best file for your Android operating system. Our files are selected very safe and do not contain malicious links or viruses. Download Lines 98 Apk now and discover it now.!

Lines 98
Rate this app
Reviews are public and editable. Past edits are visible to the developer and users unless you delete your review altogether.
0★
0 total
5 ★
4 ★
3 ★
2 ★
1 ★
We gather comments to provide users with the latest information.
Sorry, no results found.