Indeed, many people have been crazy when their favorite foods were "attacked" by ants. That's a terrible thing. Have you ever taken the time to observe an ant colony foraging? You will find it very surprising and exciting to know that an ant can carry objects many times larger than it. Furthermore, ants are highly disciplined animals. Isn't it fascinating? So why don't you try to play Idle Ants - Simulator Game Mod Apk to build a strong colony of ants and command them to bring everything back to the nest?

The Leader of the Ants Your mission is to command and develop an ant colony that will eat everything. Initially, the ant colony relied on a single small ant to transport all of the food back to the nest. You get money every time you bring food to the nest. This money is used to expand the colonies.

Overall, the gameplay of Idle Ants is not too outstanding. In the early stages, the playing speed is slow because the colony of ants is small. However, as the ants get more robust, the pace will be faster. You will find that they devour everything.

New Food and Areas for Ants 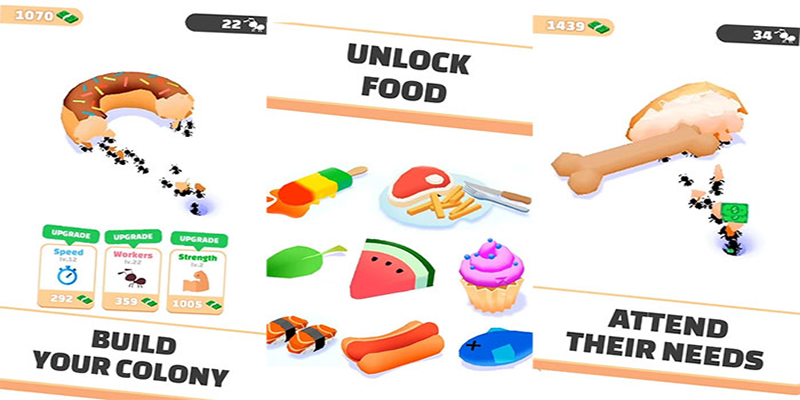 Idle Ants' stage system is highly varied, with each level containing a different item. Aside from traditional foods such as sausages, hamburgers, cakes, fruits, and so on, Idle Ants also serves various unique and strange "dishes" such as leaves, dollars, and even an airplane.

Furthermore, the levels in Idle Ants are divided into a variety of categories. Completing an area allows you to enter a new one. When you move to a new place, you have to develop a new colony of ants from the beginning. However, ant colonies in the previous area are still active and bring in a specific amount of money over time. Idle Ants transports you from the original house to locations such as forests and beaches, etc. 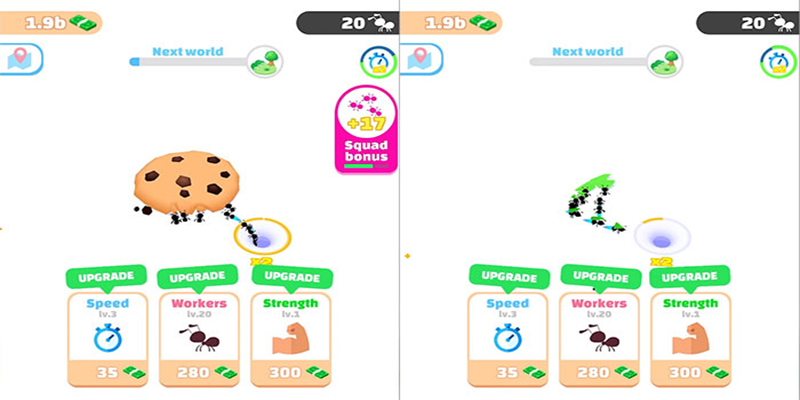 You can upgrade ant colonies in 3 different ways, including:

As previously stated, Idle Ants has three upgrade systems. It is used to increase the size, speed, and strength of large ant colonies. After each upgrade, the next upgrade will cost more money. Compared to the other two promotions, power upgrades cost more money. When you power up, your ant does not grow in size, but it can carry a large number of items. Besides, the amount earned is multiplied many times.

While playing games, most people are bothered by advertisements. However, players can take advantage of ads in Idle Ants. By watching short advertisements, you can get help, such as getting 20 more ants or doubling your income in a short period.

Also, advertising helps increase the amount of money after completing each level of play. It allows you to significantly reduce the growth of ant colonies while increasing your income.

Build an army of ants with the highest strength and conquer all lands. Delicious foods are waiting for you, let's hurry up and enjoy them. Idle Ants is not only a fun game, but it also teaches you a lot about ants. Download the Idle Ants mod to assist the ants in completing the task and safely returning home.

Idle Ants - Simulator Game
Rate this app
Reviews are public and editable. Past edits are visible to the developer and users unless you delete your review altogether.
0★
0 total
5 ★
4 ★
3 ★
2 ★
1 ★
We gather comments to provide users with the latest information.
Sorry, no results found.