Hitman Sniper is one of the most popular shooting games with millions of downloads on the Google Play Store. The appeal of the game not only comes from the name Hitman, but comes from the authenticity of each character's action and gesture. Although the game has been around for quite some time, and there are many other shooting titles on Android, Hitman Sniper is still a name worth playing.

It’s hard to put it into words, but being a sniper in a video game is somewhat exciting and thrilling at the same time. However, since this is a mobile version, it cannot provide the same experience as playing on a PC, especially when you just stand in one place and shoot people in the face. The game lacks the “Hitman” elements such as body hiding, sneaky assassinating, hand-to-hand combat; still, it has its edges. 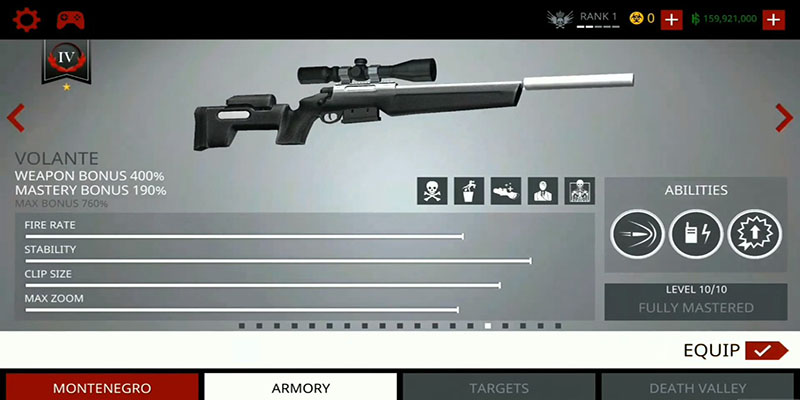 Hitman Sniper is set in Montenegro and has a single map, served as the primary environment for all the in-game assassinations. Your job is simple: kill all the targets without being noticed, and try to use different skills for more scores. Since you are on high ground, take a look at the surroundings first. Is there anything that you can make use of? A balcony, a swimming pool, a car, or even a giant fan? It’s brainstorming time, my friend.

The objectives get harder into Hitman Sniper, as your targets do not stand still but move around the mansion. Your bonus missions also require much more thinking: how to kill the boss without letting the guard notice, how to use simple physics and let the guard fall off the balcony, how to fire a curved bullet (just kidding, I have always been a “Wanted” fan), etc. It is those strategic thinkings that make the game worth the “Hitman” title.

Besides the rewards, you can spin the roulette wheel after each mission to get more money or gun parts. You can then use the gun parts to buy better rifles with new abilities, opening up different ways to assassinate your targets. 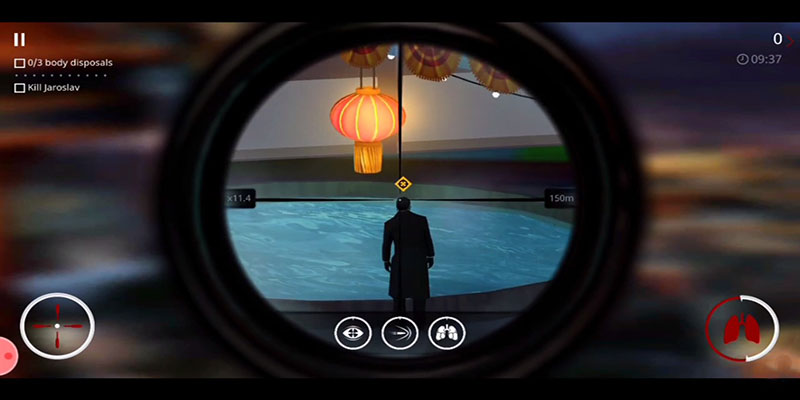 Bad news: That’s just all the excitement you can get - inside the complex and engaging gameplay is a repetitive structure. Eliminating the guard by destroying the balcony and letting him fall into the pool might be exciting at first, but by the 10th time, I'm not so sure. As I mentioned earlier, there are no real Agent 47 kinds of stuff like body hiding, knife throwing, planting bombs, etc. Everything you can do is take down your targets with your rifle. And since you lie in the same place every mission, killing the same people with the same methods is the only way to complete the game. 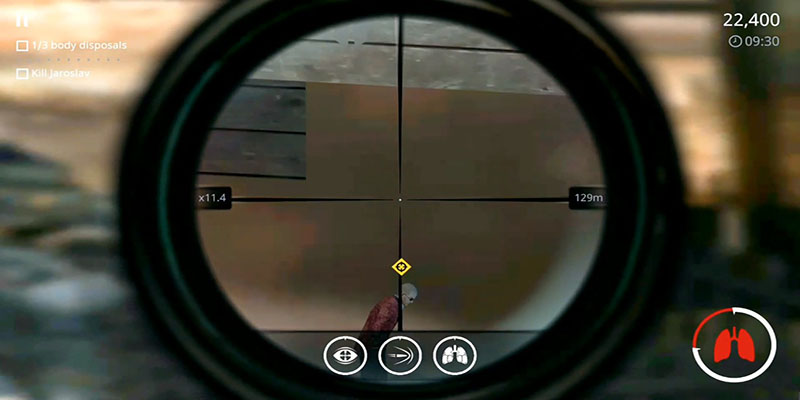 To make up for lacking the in-game depth, Hitman Sniper offers 3D graphics with meticulously designed buildings and their surroundings. You can zoom in while sniping and still keep the overall sharpness, which significantly helps your hitman career. The game uses the First Person Shooter style (FPS), making your shooting experience more realistic.

The game has some good and bad, but it’s still a shooting game worth trying at least once. With Hitman Sniper MOD APK, you don’t have to worry about your finance anymore; we got your back. Just get the best rifle in the shop and let us handle the purchase.

If you are not satisfied after playing this game, how about checking out Sniper 3D MOD APK on our site? A change is good sometimes, you know.

Hitman Sniper
Rate this app
Reviews are public and editable. Past edits are visible to the developer and users unless you delete your review altogether.
0★
0 total
5 ★
4 ★
3 ★
2 ★
1 ★
We gather comments to provide users with the latest information.
Sorry, no results found.