Description of Hills of Steel

Hills of Steel MOD APK is a great tank shooting action game from Round Zero. This is a game company that produces fun games from the visualization to the content of the game.

With fascinating but straightforward gameplay similar to Angry Birds or Hill Climb Racing 2, you command a tank's control and exceed this game's challenge. Blow the enemy away before they have a chance to do the same to you. Hills of Steel is a free-to-play game, but there are purchase packages available to unlock or upgrade new tanks. 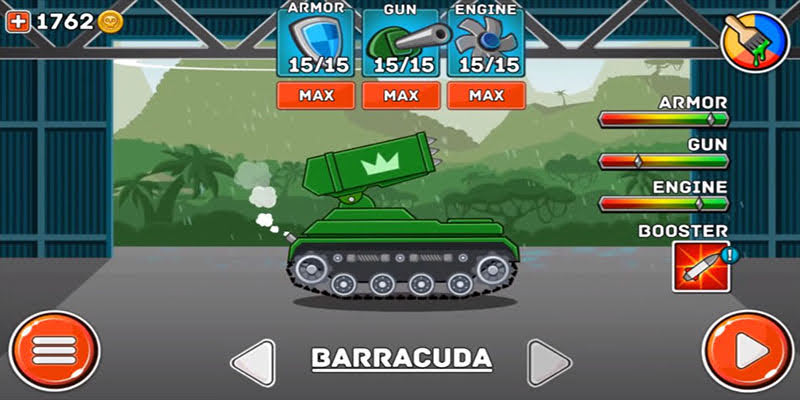 Hills of Steel's gameplay is quite simple. All you have to do is move your vehicle forward or backward and shoot enemies when they come into firing range. It appears to be straightforward. However, it is not so simple to play because the game's physics are pretty strange. However, it also makes the Hills of Steel different.

For instance, a chainsaw blade is an appropriate choice for tanks with high mobility and low damage, such as the Cobra, Joker, or Phoenix. It enables you to deal damage indefinitely as you approach the enemy. If you use Mammoth or Titan, the shield will give you defense.

There are also "upgrades" that allow your tank to use special skills in battle, such as bombing, mines, self-healing, and so on. Each tank has six different types of upgrades, and you must select the appropriate promotion for the tank type and your purpose.

Many Maps and Fun Game Modes

Hills of Steel has various maps for players to explore, including Midsummer Siege, Winter War, Desert Assault, and others. But instead of being chosen for free, players need to use coins or gems to unlock. Each map also has many rewards received by completing the level. Boss Rush is a location where you can get more coins after a battle is over.

The game also features various modes for players to explore, including Classic, Exploration, and PvP. 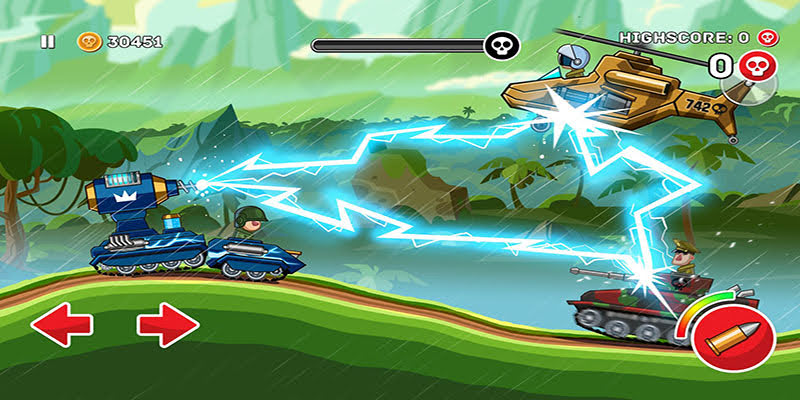 In PvP mode, you compete against another player or AI in a 1v1 match. Each battle will last no more than 60 seconds. Besides, you can fight with your friends in  2v2 multiplayer games. To win this mode, your team needs good cooperation of both players' tactics and skills.

In Exploration mode, you must shoot down all enemies in front of you and destroy powerful final bosses. You won't be limited in time in this mode, and you can even revive a destroyed tank with just a few gems.

Classic mode is relatively similar to adventure mode. You destroy the final boss as well as many of the AI's vehicles. However, this mode's difficulty and rewards will increase over time, so try to get as high a score as you can. In particular, in the "boss only" mode, you only need to fight a series of final bosses rather than a variety of enemies.

Hills of Steel features 2D graphics. Despite the lack of eye-catching graphics like in other tank-related games, the game is still appealing with vivid and friendly graphics. Tank design and customization are incredibly diverse.

You don't have to spend a lot of time earning money and gems to buy the tanks you want and unlock the maps. Hills of Steel Mod allows you to experience everything in the game for free. Everything in the shop is free to purchase. On the contrary, when you buy something, the number of coins and gems you will increase.

Hills of Steel is for you if you want to play a fun tank game. With amusing graphics and many other attractive things built in the game, you will love it. All of the above advantages have made this game successful, and it has received more than 10 million downloads on the Google Play store.

Hills of Steel
Rate this app
Reviews are public and editable. Past edits are visible to the developer and users unless you delete your review altogether.
0★
0 total
5 ★
4 ★
3 ★
2 ★
1 ★
We gather comments to provide users with the latest information.
Sorry, no results found.