Although it has been around for a long time on the Nintendo DS platform, Grand Theft Auto: Chinatown Wars Mod Apk still has a strange charm, although the price is not low. If you regularly find the best action game to play on iOS, perhaps it is not difficult to see there are a few parodies of Grand Theft Auto style but not as attractive as the Rockstar product. After five long years, Rockstar decided to refresh the product by bringing the game to the Android platform. 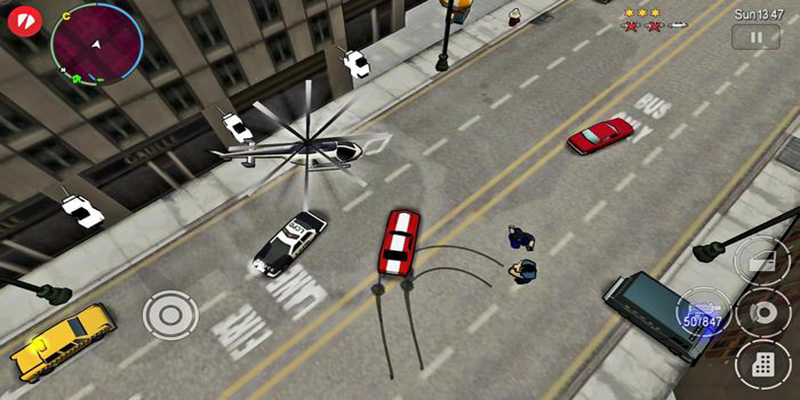 Set in the Liberty City in GTA IV (one island less compared to the console version), the plot of Chinatown Wars revolves around the main character Huang Lee in the fight against the criminal gangs in the city.

When he heard that his father, a boss in the gangsters, had been assassinated, Huang quickly flew from Hong Kong to Liberty to find out about his death. From this moment, Huang was pushed into a spiral of power between different gangs to take over the throne that his father left behind. 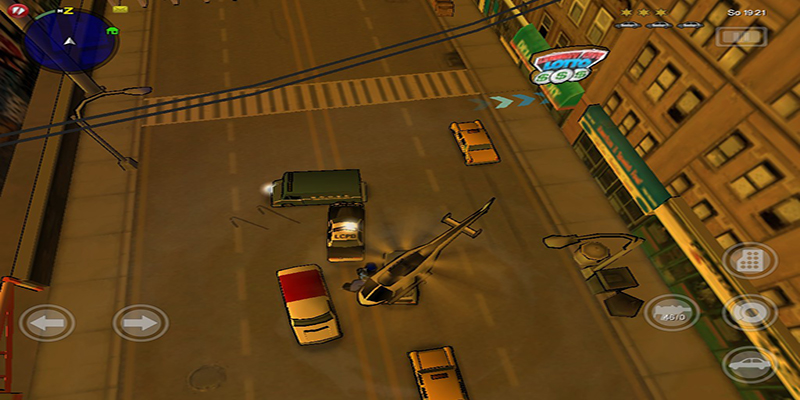 Overall, Chinatown Wars has the same gameplay as other GTA games. The action of moving and robbing the car remains the same as compared to the traditional control mechanism. In addition, the game also provides players with effective help options such as automatically targeting when you are driving or automatically locating the target with the GPS right on the mini-map located at the bottom corner of the screen.

In the new version of the game Grand Theft Auto: Chinatown Wars, you can feel that the manufacturer has cleverly arranged countless interesting tasks into the game, although the game size is not large at all. Thrilling situations or funny car thefts are the highlights of the game, helping players feel much more excited when playing. Besides that, there are mini-game systems and small missions that contain many surprises.

Grand Theft Auto: Chinatown Wars is the first game in the GTA series that allows you to replay old quests to set new records. The Trip Skip mechanism saves you a considerable amount of time in failed missions, so you can continue in your previous position instead of having to redo everything from scratch.

The game’s weapon system is quite diverse, with more than 20 types of weapons from smoke grenades, flamethrowers, swords to pistols, shotguns, special sniper rifles, etc. Players can order weapons at the Ammu-Nation homepage via their PDA.

As I mentioned, there will be a lot of cool things to do in Chinatown Wars, as this is an open-world game like every other GTA game. You can steal supercars, join streetfights, or even gunfights between the gangs. I'm sorry, but I enjoyed stealing the car of a random NPC on the way. Will that turn me into a criminal? Anyway, this city is mine; I can do whatever I want!

However, be careful. If you kill people or destroy something, the police will come. There are six wanted levels denoted by six stars. In level six, a lot of police special forces and helicopters will chase after you. Unlike GTA IV, you can remove a wanted order by destroying police cars but not injuring anyone. If death is imminent, fleeing into the paint shop for cars is also a good solution.

If you are tired of doing the main storyline of the game, players still have a lot to do in Liberty City. You can steal police cars, ambulances, taxis or fire trucks, noodles delivery trucks, etc., and perform similar side tasks like robbery, fire fighting, passenger transportation, etc.

In addition, players can participate in racing missions, with a system of jumping points (Stunt Jump) and more than 100 hidden cameras scattered on the map waiting for players to explore.

The graphics and sound of Chinatown Wars on Android are much superior to its DS counterpart. Models of buildings, cars, characters, and landscapes in the game are very well done and full of details. Lighting effects, weather effects, and time of the day are not inferior to any previous GTA game on mobile platforms.

The audio of Chinatown Wars also satisfies players with 11 different radio channels corresponding to 8 genres: Rock, Metal, Hip Hop, etc. In addition, the sound effects in the game like the sound of cars breaking, people screaming, or gunshots are all taken care of.

To focus on exploring the open world without worrying about making money or doing quests, our MOD will give you unlimited money and ammunition to use as you like. Now you can buy the most expensive guns with no worries. Download and install GTA: Chinatown Wars MOD APK with the link below.

GTA: Chinatown Wars
Rate this app
Reviews are public and editable. Past edits are visible to the developer and users unless you delete your review altogether.
0★
0 total
5 ★
4 ★
3 ★
2 ★
1 ★
We gather comments to provide users with the latest information.
Sorry, no results found.