There is no denying that street football is another interesting aspect of football. In fact, it is the term used to refer to a kind of football that does not take place in a stadium with football rules. Instead, the players can take advantage of the space on the street to play ball. Street football is a great inspiration for many talented and famous players in the world such as Neymar, Pelé, Garrincha, and more.

However, the street soccer mobile game is not yet popular. In this article, I will introduce to you one of the best games on this topic. It is Extreme Football: 3 on 3 Multiplayer Soccer MOD APK. Let's check it out now! 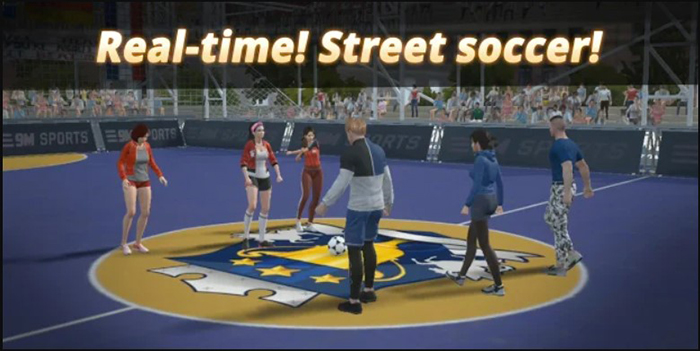 As mentioned above, this game is set as a street football field, where you can freely show off your personal skills. Each team will consist of 3 players plus 1 goalkeeper. Each match will have about 3 minutes for two teams to fight hard. The team that scores more goals will automatically win the match at the end of time.

Also, this game allows you to compete with friends and players around the world. It offers a lot of modes to choose from including 1v1, 2v2, and 3v3. Move around to find space and support your teammates if you want to win!

Control of your game depends on the virtual button at the bottom of the screen. On the left side of the screen, you can use the buttons to move the player. While on the right you can use virtual keys to interact with the ball.

It is worth mentioning in Extreme Football that you will not have control of an entire squad like you have to do in eFootball PES 2021. Instead, you can only control one player. You have to move constantly to find space and assist your teammates to score. You can completely score from a distance with accurate calculation and a little luck.

The Soccer Match for Everyone

By allowing both men and women to play in a ball game, Extreme Football breaks the gender difference to provide a level of football.

However, you will not have to hesitate between choosing a female or a male character as their basic stats are the same, even though each character has his own special features and skills.

In addition to participating in the AI mode, you can compete with players around the world through tournament mode. In this mode, you can use your favorite character in the squad to compete with 3 other players. You can also invite your friends to join an online match. This is not a bad idea, right?

This game has a relatively good graphics platform. The football field is also designed differently with many different scenes. Thanks to that, you will never get bored. All in-game characters are designed with eye-catching and come with great skill effects. Thus, it is no surprise that Extreme Football received quite good feedback in terms of graphics.

In general, Extreme Football MOD APK is a great game that has unique gameplay and nice graphics. However, to be able to compete with the current football games on the market, the developer needs to add many new features.