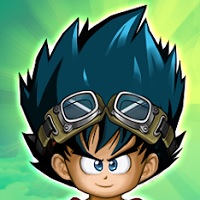 Little Dragon is a role-playing game on mobile that is currently receiving a lot of attention from players. The game content is based on the famous Japanese manga "Dragon Ball" and the player will be transformed into one of the heroes of the three planets in the galaxy to fight against the evil forces. . Gameplay promises to bring endless adventures and the most relaxing moments for gamers.

Games adapted or inspired by comics always attract game lovers, and TeaMobi publisher TeaMobi's Dragon Boy has also created a fever in the past 8 years. Game content is pure and cute graphics, gameplay makes millions of gamers passionate and excited.

Entering the world of hacking game Little Dragon, gamers will have to choose one of 3 planets: Earth, Namac, Xayda to enter the fight against bad guys. Each planet will have 3 different character systems, including: Earth has heroes Gohan, Krillin, Yamcha; planet Namac has heroes Pocollo, Snail and Kami; Planet Xayda has heroes Cadic, Radic, and Kakalot. Each planet is designed with a different context, but the player's task is exactly the same.

Through dozens of levels of the game version, the player must control the character to move through different lands to fight the evil forces. Especially, you must use the right moves to attack the opponent, including: Dragon punch for melee attacks, Kamejoko is a long-range attack thanks to energy, Thai Duong Ha San to dazzle the opponent. On the other hand, the Makankosappo move will help the character unleash a spiral laser beam, a transformation move, an auto-explosion skill, etc.

To support the character easily to win, the game also has many items appearing such as: gloves, shirt, pants, shoes (helping to protect the hero's body) and flying animals (helping the hero) object in the air).

The game version has simple controls, players just need to touch the character to move. Select a target to attack, then tap the same target twice in succession.

Gamers will be extremely interested and admired at the serious investment of the father of TeaMobi for the Dragon Boy through the continuous light effect emitted when the character performs actions: punching, kicking. In addition, when hovering in the air, behind the character's back will appear a flashing light ring full of eyes.

Although only built on a 2D graphics platform, Little Dragon still attracts gamers by creating a well-rounded, cute character, true to the character in the comic. The game context is diverse, each planet is meticulously designed with different scenes, day-night effects and color schemes, contributing to attracting players. The sound in the game simulates the character's every step in detail, rushing attacks and deploying powerful martial arts moves.

We provide Dragon Ball Mod Apk and original version on Google Play. Choose the best file for your Android operating system. Our files are selected very safe and do not contain malicious links or viruses. Download Baby Dragon Apk now and discover it now.!

Chú Bé Rồng
Rate this app
Reviews are public and editable. Past edits are visible to the developer and users unless you delete your review altogether.
0★
0 total
5 ★
4 ★
3 ★
2 ★
1 ★
We gather comments to provide users with the latest information.
Sorry, no results found.