Indeed when you were a student, you took at least one bus ride. The bus is a popular means of public transport in many countries around the world. So have you ever wanted to drive a bus? If you are going to, welcome to Bus Simulator Indonesia MOD APK.

It is a highly realistic bus driving simulator game for Android phones. You will be given the opportunity to become a driver, transporting people to various locations throughout Indonesia. 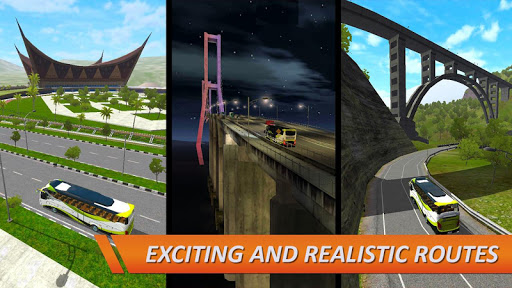 You will play the role of a bus driver in the game. Your job is to drive, receive, and transport passengers to their destinations. You will be assigned tasks with a variety of requirements. Each mission will have a unique set of routes and terrain. Furthermore, factors such as traffic and weather conditions have an impact on you. These conditions will change continuously on each itinerary. 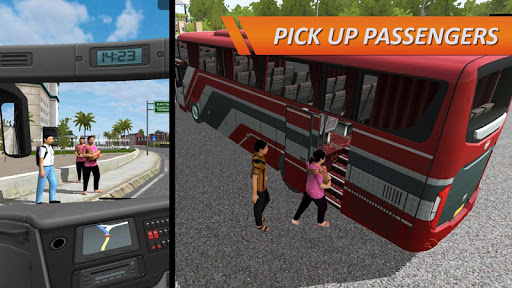 In general, the gameplay and control system is also quite simple. The player controls the car with three buttons: steering wheel, brake, and gas. The control system is accurately described. Other features to consider include lights, signals, horns, and an emergency call system.

Because the game's context is the cities in Indonesia, the buses in the game are simulated from real-life vehicles in this country. It is only equipped with six buses, but each bus will have unique looks and features. You will have to take time to get used to these cars. Some buses are inexpensive, while others are prohibitively expensive. As a result, if you want to own all six buses, you'll have to work hard to make a lot of money.

You can upgrade and customize your buses in addition to having a diverse bus system. You also can change the vehicle's parts in the upgrade section. There are over 30 items to choose from, including headlights, wheel mudflaps, curtains, and so on. The majority of these items are pretty inexpensive. However, if you want your car to have a different appearance, you will have to pay a lot of money for many of these items. You can also change the color of the car's paint and the background music. 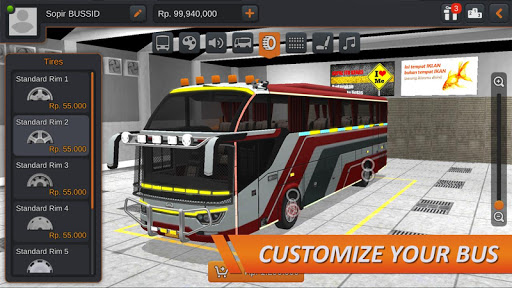 There are three game modes to choose from: free play, career mode, and multiplayer.

In Multiplayer mode, you will first be connected to other players. Bus Simulator Indonesia provides two options: you can select a server by region (Europe, Asia, Australia, India, Japan, etc.), or you can let the game choose the server with the fastest transmission speed.

The career mode includes a variety of missions. Its content is well-structured and will put your driving skills to the test. As a result, it includes enticing bonuses for the most talented drivers.

Free mode allows you to play your way. There will be no rules, no penalties, no pressures, and no duties for you. Thus, you can drive comfortably like a tour, admire the Indonesian landscape through the bus window.

As gamers perform the functions, the game is designed to be intuitive and straightforward. Besides, the image is intended with high-quality 3D graphics. When played in full-screen mode, the game is relatively sharp, and the shooting angles are realistic. The design team relied on accurate Indonesian models to outline streets, buildings, cities, and territories to resemble natural landmarks. The map is extensive, and you can even consider the game experience to be a journey. Besides, the realistic sound system also helps to give players the best experience.

The game is rated 4/5 stars and received much positive feedback from gamers with more than 50 million downloads. Here are some of the comments of gamers:

"Bus Simulator Indonesia (also known as BUSSID) will let you experience what they love about being a bus driver in Indonesia in a fun and authentic way. BUSSID may not be the first game, but it is probably one of the only bus simulator games with the most realistic Indonesian features and environments."

"I love this kind of driving simulation game! I hope that the game developers will equip more features in the next versions."

Are you ready to be a bus driver? Download Bus Simulator Indonesia MOD APK to start an adventure across Indonesia with your passengers. Also, you will have an unlimited fuel feature from the MOD version.

Bus Simulator Indonesia
Rate this app
Reviews are public and editable. Past edits are visible to the developer and users unless you delete your review altogether.
0★
0 total
5 ★
4 ★
3 ★
2 ★
1 ★
We gather comments to provide users with the latest information.
Sorry, no results found.