The next sequel of the Angry Birds franchise, Angry Birds 2, is out! Many other Angry Birds titles have been released over the years; most were crossovers with blockbuster movies. Now, the game is back on track with our original heroes: Red, Chuck, Bomb, Matilda, Silver, etc. Will this game continue the success of Angry Birds 1, or is it just a hopeless redemption from Rovio before the game is completely forgotten? Let’s find out!

The Pigs Have Come Back Once More

The clashes in Angry Birds have always been between the grumpy birds and the cheerful pigs (I don’t really get it, but those pigs seem happier than I am during Christmas!) So, the pigs stole the birds’ eggs, and the birds take their revenge by demolishing all the pig’s bases - just another ordinary day on Bird Island. Who should be the angry ones here, the attacker/destroyer, or the pillager/defender? 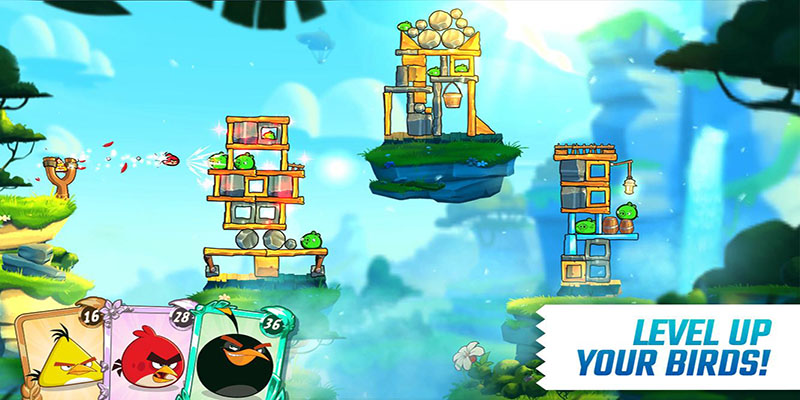 Rovio still keeps the original suicide-bird-squad style from Angry Birds 1, but with more upgrades and changes. One thing for sure is Angry Birds 2 is much more challenging.

During levels, players are unable to select their desired birds. Instead, they will be randomly chosen from a bird pool of which players have previously unlocked. Only three birds are shown face-up on every level, whereas the rest will be put face down as substitutes. You can choose the order to fire the three face-up birds; afterward, a replacement will sub the bird you have played. This is a significant change compared to the game’s prequel. Sometimes, you won’t have the birds that you need, and you have to replay that level. And this is one of the most controversial issues of Angry Birds 2.

Angry Birds 2 follows the Candy Crush style in the way that you will have a few lives to spend. If you pass the level in one go, then this should not be your concern. However, that’s rarely the case. Due to the random factor, sometimes you have to spend days just to pass a single map. 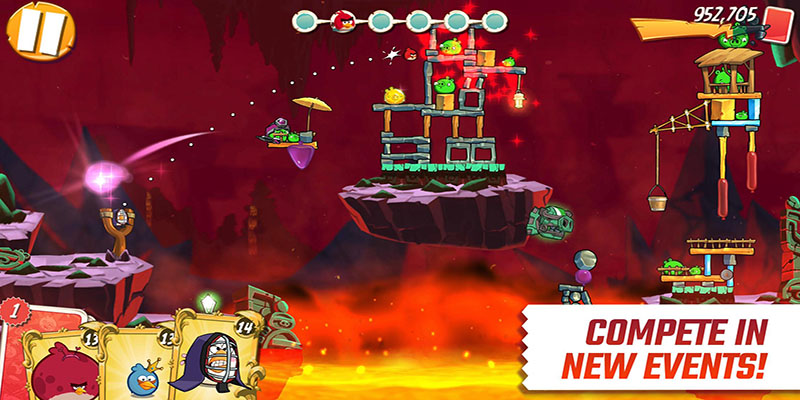 You are given five chances; after that, you are done with the game. It will cost tons of gems just to refill, and it totally breaks the free-to-play concept of the Angry Birds series. Why would I waste my money on microtransactions like that? Why can’t I unlock the game and play it as many times as I want? I would be more than happy to purchase the full version of the game, but no, the developers prefer milking from us players slowly until we are dry out.

Besides the idiotic playstyle that I have just mentioned, Angry Birds 2 also has some improvements. The birds won’t have to fight alone anymore; they can use magic now and equip themselves with some equipment and accessories! The spells are only for a limited amount of time and can only be obtained during events. This is a nice change to spice things up a bit, but I doubt that will be enough to make up for the unpleasant experience the game brought.

Putting aside the visual design, I absolutely love the physics used in the Angry Birds series. The concept of throwing a bird as a boomerang, or fling it as a bomb, really amuses me. And it seems Angry Birds 2 has kept up with the tradition. There are regular members of the suicide squad like Red and Chuck with known trajectories, and there are recruits with new flying paths like Silver and Stella. Always fun to see something new! 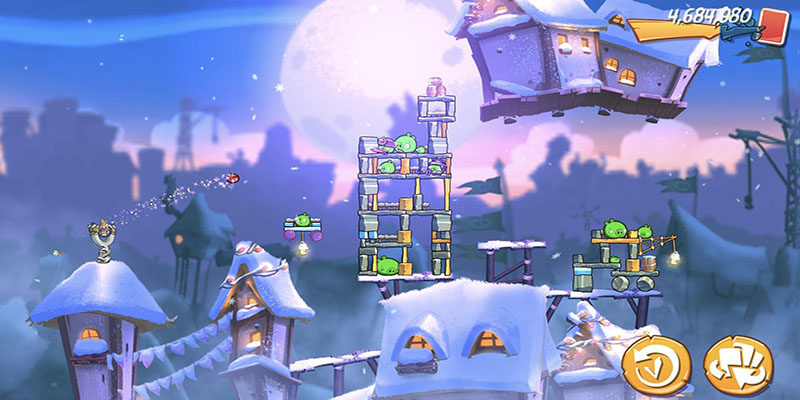 Back to the graphics, Angry Birds 2 has brilliant color and a more meticulous design than the original version. You can see the expression of each bird as they fly across the screen, or the silly smiles on those piggy faces, as expected from a casual game with more than a dozen prequels.

So far, I have been blabbing about the game’s drawback: the lack of free-to-play elements. With this MOD, everything is solved! The modded version includes unlimited money and energy; thus, you can enjoy the game all day long, without limitations. Download and install the MOD now!