Description of Anger of stick 5

Anger of Stick 5 Mod Apk is the fifth installment of the stickman series from developer J-PARK. Amidst a myriad of new-generation role-playing, action, or strategy games, classic titles like this one are very popular. They are incredibly easy to play, yet highly engaging and entertaining. In this review, let’s find out why casual games like Anger of Stick 5 have such a high appeal.

Coming to Anger of Stick 5: Zombie, you will become a stickman hero, fighting to destroy the evil forces and rescue people in need of your help. You will need to overcome many different challenges to achieve your goal. Depending on the level, the number of enemies will be different, and their strength will also increase with each level.

It can be said that Anger of Stick 5 apk has straightforward and easy-to-understand gameplay. Players only need to go from the beginning to the end, defeat all enemies and rescue all targets. The control system is also not complicated. The screen is divided into left and right, with the left side consisting of 2 arrows to navigate forward or backward. The right side contains Jump, Interact, Attack, and Range Attack. In the middle of the screen is the Special Attack and Weapon Change. Players can combine the attack and movement buttons to form stunning and powerful attack combos. 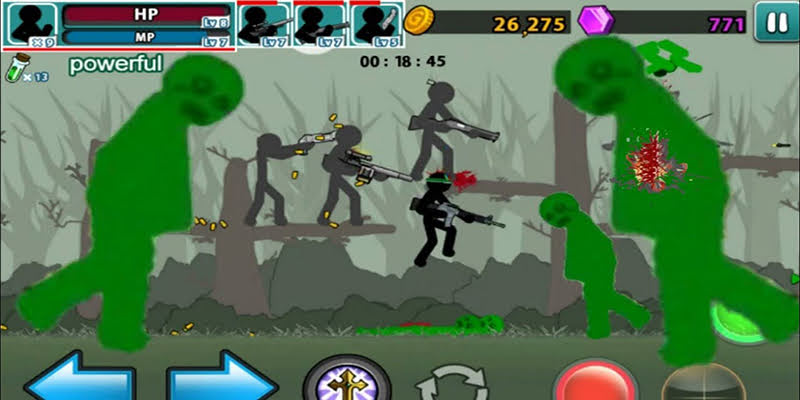 On each level, besides destroying all the bad guys, you also need to rescue those in captivity. Completing all targets in the time allowed will give players lots of bonus points.

The characters in the game are in the form of a stick man, relatively simple and easy to recognize. However, players cannot change the shape or outfit of their character. Players can use bonus diamonds to increase the level as well as their hero’s stats.

Besides using punching and kicking combinations, in Anger of Stick 5: Zombie, players can also use many different weapons such as knife, pistol, machine gun, etc. Each weapon has its own stats, with distinct special abilities. 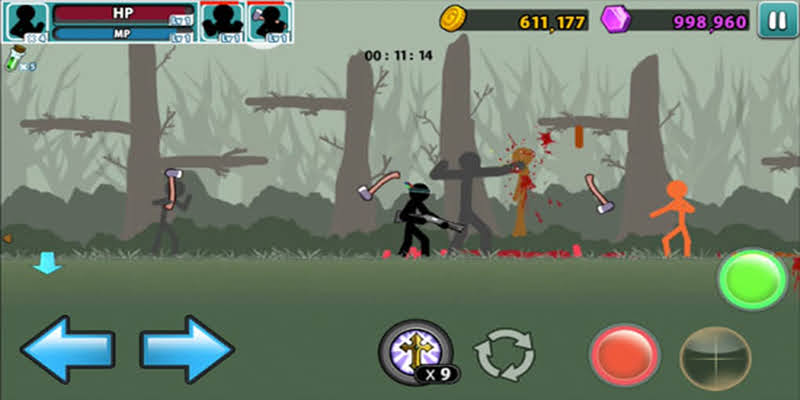 Although designed quite simple in terms of gameplay, characters, and weapon systems, the game mode in Anger of Stick 5: Zombie Mod Apk is extremely diverse. Besides the Single mode, in this version, there is also the appearance of Zombie mode with three options: Zombie, Jump Jump, and Defense.

In Zombie mode, instead of fighting evil goons, players will have to face extremely aggressive zombies. Unlike ordinary humans, zombies can move, attack, and has superb resistance. It is certainly not an easy task to destroy these undeads.

The game also has two other modes, including Defense (withstand waves of attack from the goons and zombies) and Jump Jump (jump on iron bars and climb as high as possible while clearing the surrounding enemies). Both are extremely interesting and amusing to play.

Anger of Stick 5: Zombie currently does not have background music in the main menu or inside the game mode. However, the game has outstanding combat sound effects, making each fight more dramatic and engaging.

Although the game characters are designed in stick form, their movements are very smooth, diverse, and eye-catching during combat. The background is not too colorful, but it is enough to make the game more thrilling and exciting. 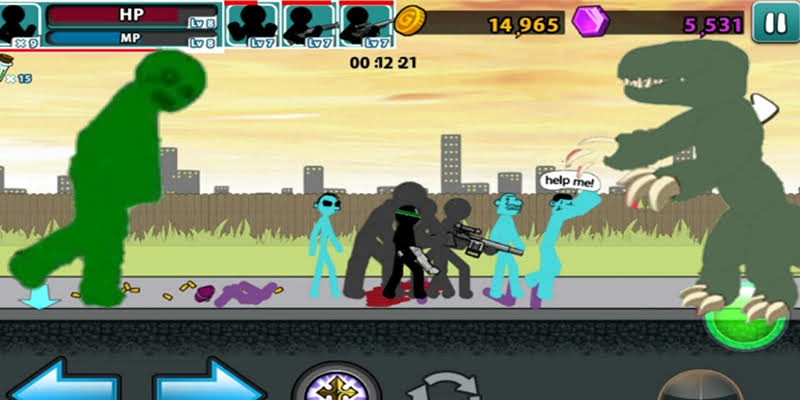 Anger of Stick 5 apk features unlimited money and diamond to upgrade your hero. Download this modded version and destroy all those zombies now!